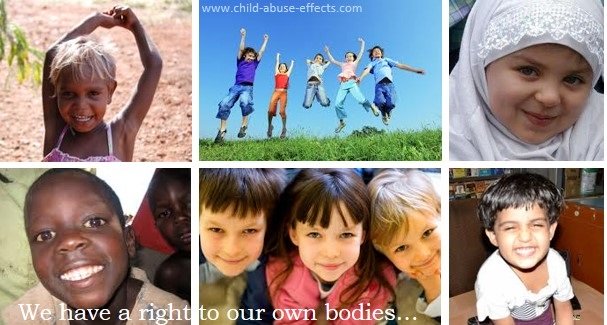 Sexual abuse effects on children and youth can be evident in emotional, physical and behavioural ways. These effects can be just as devastating whether there was only one occurrence or there were repeated occurrences. Sexual abuse cannot be compared, because each abuse experience is unique.

The above factors lead to:

Miraculously, not all children or youth molestation victims display signs that something is wrong.

Why do some victims display a multitude of emotional and behavioural effects, while others display few or none? In spite of few or no outward symptoms, child and youth victims do suffer emotionally. These emotional effects come in varying degrees, depending on the following six factors:

Molested children suffer many losses, including:

»  self-esteem and self-worth
»  trust
»  childhood, including the opportunity to play and learn
»  the opportunity
»  intimacy
»  control over his/her body
»  normal loving and nurturing
»  safety and security

»  with young children, a preoccupation with sexual organs of self, parents and others--often this shows itself in language and art
»  aggression and bullying behaviours

»  sudden changes in eating and/or sleeping habits
»  depression and anxiety

»  anti-social behaviour
»  unwillingness to participate in social activities
»  running away

»  long absence from participation in extracurricular activities
»  dissociation--a child's existence is dependent on his/her ability to separate from the pain, which, in the most repulsive cases, may result in multiple personalities
»  risky behaviours such as firestarting, stealing and other delinquencies
»  animal cruelty
»  alcohol and drug abuse

»  in adulthood, sexual dysfunction--avoidance of or phobic reactions to sexual intimacy
»  becomes the abuser


Other Sexual Abuse pages on this site