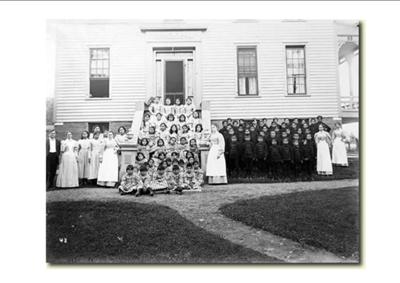 It's A Wonder There is Nothing on this site about this Atrocity:
It's sad that there is not a single story here about the horrific abuses Native American CHILDREN have endured at the hands of the CHURCHES AND GOVERNMENTS OF CANADA & THE UNITED STATES. So I'll enlighten you with a heavy heart...

Imagine, if you will, being torn from your family, separated from your brothers and sisters beaten for speaking your mother-tongue, raped repeatedly, "rented-out" to farmers (who would also rape, beat & torture you),and witness several of your friends die, either by being beaten to death or deliberately exposed to TB. Yes it happened and don't say it was a long time ago; The last one in Canada finally was shut down in 1996. There is information on this subject all over the internet if one cared to look...

Here is a timeline:

Residential Schools - A Chronology
1890s - early 1900s
Residential and Industrial Schools were established in locations across Canada, predominantly in Western Canada for the purpose of "killing the Indian in the child." Over 150,000 children attended these residential schools up to 1996.

1990
Phil Fontaine, Grand Chief of the Manitoba Chiefs goes public as the first Indian leader to tell the story of his own abuse in residential school and calls for recognition of the abuse, compensation and an apology for the inherent racism in the policy.

1996
The Royal Commission on Aboriginal Peoples recommends that a public inquiry be held to investigate and document the abuses in Indian Residential Schools.

1997
July - Phil Fontaine elected as National Chief of the Assembly of First Nations.

AFN initiates negotiations with federal government officials for an out-of-court settlement for the residential school abuses.

May - The Aboriginal Healing Foundation is established.
A class action is commenced for a single Indian Residential School in Ontario.

2001
Department of Indian Residential Schools Resolution Canada is formed to deal with the out of court settlement of residential school abuse claims.

2004
March - AFN and the University of Calgary Law School organize a national conference to examine the ADR process, and delegates find it to be seriously flawed.

November - AFN, through an expert committee, publishes the Report on Canada's Dispute Resolution Plan to Compensate for Abuses in Indian Residential Schools, which sets out the requirements for a holistic, just and fair settlement for all residential school survivors, the key elements of which are:


2005
January - AFN begins discussions with officials to consider the elements of the AFN Report.

May 30 - National Chief Phil Fontaine signs the Political Agreement with Canada. The Agreement appoints the Hon. Frank Iacobucci to be the government representative in final settlement negotiations. The Agreement states that the AFN will play a "key and central role" and that the AFN Report will form the basis of the Settlement.

July - Negotiations with all parties commence in various locations in Canada.

November 30 - All parties to the negotiations sign the Agreement in Principle, incorporating all of the key AFN Report recommendations.

2006
All parties commence negotiations leading towards a final settlement agreement.

Unfortunately, according to the agreement, any survivor that passed away prior to 1998 doesn't qualify. The governemtn says "Oh Well"!

As of June 15 2010 The Truth & Reconciliation Commission has begun to hear the testimony of THOUSANDS as to the abuses suffered in the Residential School System. The testimonies will continue through Friday June 18th...LET THE TRUTH BE KNOWN! PEOPLE NEED TO KNOW THIS!

Note from Darlene: If I have not left a comment on your story, please understand that it is not personal; it's just that my hectic schedule no longer permits me to do so.