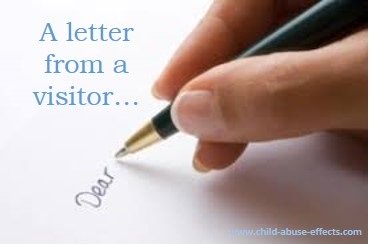 Link between childhood obesity and child abuse is an exchange between Sarah and me. Sarah is from Perth, Western Australia.

You ask an excellent question, Sarah.

I have heard of the case in England where an 8-year-old boy was almost removed from his mother's care because she continued to over feed him. Perhaps you heard of some of the American cases.

One boy named Jared was 3 years old and weighed 120 pounds. He was taken away and placed in foster care. Jared has now lost 70 pounds.

Another boy was in a similar situation. His mother was grossly over feeding him. The father, estranged from the boys mother but now remarried, appealed to the courts for temporary custody of their son, using the mother's over feeding of their 4-year-old son as grounds for obtaining custody. The father won his case.

The boy is now 8 years old. He still lives with his father and stepmother. He has lost more than half his body weight since the time of the custody hearing.

Yes, over feeding a child, especially to the point of obesity or morbid obesity, does constitute child abuse. Let me explain why.

It is up to a parent or guardian to ensure the basic needs of a child are met. Parents must provide many basic needs. One of these is food, but it is food for nourishment, not food to the point of excess and obesity. Nor is it food that puts the child in a malnourished state. One must consider what the child is being fed, not just the quantity.

Another basic need a parent must provide is a safe environment. That safe environment extends to good health. When a parent over feeds their child to the point of obesity or morbid obesity, that parent puts the child at risk for diabetes, heart disease, stroke, plus a host of other medical ailments. A parent who feeds a child to the point of obesity is a parent who is ignoring the health risks associated with over eating. A child in this state is a child in an unsafe and unhealthy environment. When a parent chooses health risks for their child over the safety and health of their child, that parent is neglecting their child. Child neglect is child abuse, and neglect is a choice.

I will be posting your query and my response to a brand new individual page in the coming days. Rest assured, you will remain anonymous. I wish you well in your studies and research, Sarah.

Should a child who is over fed by a parent be removed from the home?

In my opinion, removing a child from their home must be a last resort. The parent who over feeds their child must have the opportunity to correct the abusive behaviour. This would be in the best interest of the child. However, parents must have access to resources that will help them and their child.

Justin Painter lives in Polk County, North Carolina. He is 7 years old and weighs 254 pounds. Doctors have been unable to find any medical reason for Justin's morbid obesity.

Justin's mother, Joyce, insists that she is feeding him properly, which includes vegetables, and does not include cookies, chips or anything along those lines. She claims Justin is active and that she controls his meals, but that she's at a loss of what else she can do.

The Department of Social Services has given Joyce 2 months to get her son's weight down. Joyce now has Justin in two programs for weight loss: one with a medical doctor, the other with Duke University. I understand that the latter is still doing tests, trying to determine the cause of Justin's morbid obesity.

In America, Social Services and the courts are intervening more and more with cases of children who are over fed by a parent. They are doing so because the very health and safety of these children are at risk.

I don't know if Joyce Painter is telling the truth or not. I only know that her son's health is in jeopardy. I applaud her efforts at trying to get help for her son, as well as the efforts of the Department of Social Services for intervening on Justin's behalf.

Justin's health and safety are what matter here. Besides love, nurturing and emotional support, Justin needs physical exercise, fresh air, nutritional food and appropriate medical care. Justin is worth it. It is his birthright. It is the birthright of all children to have both their emotional and physical basic needs met.