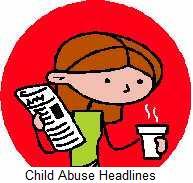 What follows below is a comment that came through my page titled Can Childhood Spankings be Administered Because of or Lead to a Spanking Fetish? I've decided to post it here in order to give it more exposure. Also, because of the space limitations within the comments sections (3,000- vs. 10,000-character limit on full-page submissions) I felt it was best to address this issue as its own topic.

Comment by: Anonymous
Why do you only display answers that agree with you

Youe story sounds a bit far fetched, Possibly the produst of your own fantasy...

Reply from Darlene: Interesting that you feel the need to hide behind anonymity, and yet accuse me of fantasy when I print what is true under my full name.

What I don't post are comments that promote or advocate violence against children. Period. End of story. There are plenty of places on the web that allow that; as a Violence and Abuse Prevention Educator, I do not and will not permit such comments to go live here.

Whether or not you believe what I posted doesn't concern me. I know what I know. I know what I saw in my mother's closet. I know that my mother used bondage and fetish on her own children under the guise of discipline. My mother was the one with the fetish. My mother was the one who used her children to enact those fetishes. My decision to post this truth was to address what was in the title, in part because fetish is a child abuse effect, in part because by disclosing what happened to my siblings and me, I've in essence given permission for others to also disclose such terrible crimes committed against them by the very people in charge of protecting them: mothers, fathers, caregivers, and people with authority over them. At least three such visitors come to mind. Believe whatever you must, Anonymous, if that's what justifies such truth in your mind, but the fact that you are so willing to brush off the truth makes me question your motives for coming here.

You are obviously not here to learn anything about child abuse or its effects; rather, I suspect you are here to do what so many have done for seemingly millenia: discredit those who are sharing the truth about what child abuse did to them. Or perhaps reading the truth about child abuse and its effects (my mother was a product of severe physical child abuse herself) is too painful for you to admit to or comprehend. Perhaps it rips apart the fabric of your belief system. It's people who refuse to acknowledge that even mothers are capable of heinous crimes against their children—including sexual crimes—that allow it to continue. When we put on blinders to such crimes, we enable them. By accusing me of posting something that is all about my "own fantasy" as you call it, only shows your own ignorance, your own willingness to perpetuate the problem.

And just for the record, I don't ask my visitors to give answers. I invite my visitors to offer validating, supportive and encouraging comments to other visitors who are brave enough to disclose the abuse that happened to them; those are the rules of conduct on this site. Visitors who don't want to abide by those rules, but instead post degrading and non-supportive comments, are deleted and often times banned from commenting further. I reserve, and have that right, as creator and webmaster of this site.