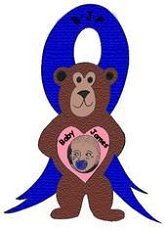 The Baby James Foundation's (BJF) goal is to create nationally, an environment that assures:

The foundation was founded by our President Renee Hutchinson after years of abuse herself. Her stepson, James, was abused and neglected by his biological mother. She then decided it was time to fight back and do something about it.

Our Vice President Darlene Chen then joined in on the cause. She is raising her granddaughter, Kayla, after being abused and neglected by her biological mother.

Our annual child abuse rally and vigil is being planned for Saturday, April 25, 2009. It will be held in Brownstown, Illinois.

Note from Darlene: The volume of contributor submissions has now made it impossible for me to comment personally (especially in great detail) on each and every contribution. If I haven't left you a comment or one that is in-depth, please do not take my lack of a personal response as a slight, or as a statement that your story is somehow unworthy of my time. Nothing, and I do mean nothing, could be further from the truth. If there was a way for me to respond to all of you at length, I would.